Decades ago, when religious men and women were teeming in our Catholic schools, the daily pursuit of virtue was embedded in the lexicon and in everyday interactions.  Students regularly received feedback regarding how they were developing in habits of mind and in character formation. As religious men and women’s apostolates were calling them elsewhere, virtue faded from the educational scene. Our schools became more focused on academic performance and driven by standardized test scores and the social and emotional life of students became implicit and inferred. Virtually simultaneously as academicians and parents became aware that this performance-oriented approach wasn’t working, emerging modern neuroscience strongly indicated that the emotional and social experiences of children must be tended to protect learning, growth, and even mental health.  Neuroscience findings from the Decade of the Brain (1990-2000) specifically indicated that neuroplasticity (i.e., the ability of the brain to change its structure in response to experience) exists across the lifespan but is greatest in childhood, that this brain wiring is occurring in the context of daily experiences and relationships, and that stress and emotion interfere with new learning and maturation. Essentially, interpersonal neurobiology posits that “experience is the architect of the mind.”  Furthermore, the age of the internet and the informational complexity that accompanies it (e.g.,social media, flooding from informational access), further demands that we think more explicitly about how we use education to direct experiences and wire children’s brains for good and for health.

Interpersonal neurobiology-informed approaches based on neuroscience are being prescribed in public schools through such programs as social-emotional learning (SEL) and positive behavior support.  The Collaborative for Academic and Social Emotional Learning (CASEL) identified five core competencies which need to be taught in order to build academic success and maturation including self-awareness, self-management, right decision-making, relational skills and social awareness.  While these recommendations are based on important neuroscientific findings, their implementation hasn’t always been beneficent.  So what is our mission in this context as Catholic educators and what differentiates our Catholic approach from mere behavior modification and skill building?  We suggest that teaching virtue in the context of sacramental life and the promises of Baptism allows children to be raised in the grace first infused in them in infancy and which must be continued throughout their childhood and into adolescence.

We are suggesting that a return to teaching of the theological and moral virtues (i.e., temperance, fortitude, prudence, and justice) responds to the need for social and emotional learning in Catholic schools.  What is unique about creating a school culture of virtue, as well as the practice of the sacramental life, is that it explicitly continues the graces infused in a child at Baptism. This means that a child is embedded in a community and regular sacramental practice that builds a knowing that they are not alone in their maturational journey.  Indeed, they learn that they do not have to simply build skills on their own to succeed, but can rely on a life-giving relationship with Christ and His grace during the rigors and challenges of growing up.  Neuroplasticity teaches us that the “knitting together” begun by God in the womb continues throughout the developmental course from birth to 24 years old.   Interpersonal neurobiologists (Siegel & Bryson, 2020) suggest that this “knitting together” must necessarily occur in the context of safe and secure relationships in which a child feels also “seen and soothed.”  This is precisely what a school culture focused on living and practicing the theological virtues of faith, hope and love creates in order that a child can be receptive to the grace given through the Holy Spirit and can practice openness, curiosity and creativity with their learning.  Many of us have fond memories of young children vigorously singing William Bradbury’s tune (1862) “Jesus loves me, this I know, for the Bible tells me so, little ones to him belong, we are weak and He is strong.”  Creating secure attachments throughout a school setting using the theological virtues is critical in this age of anxiety where a child’s attention is being diverted to internet excess and social and moral deconstruction.

Interpersonal Neurobiology and the Moral Virtues

Interpersonal neurobiologists (Siegel & Bryson, 2018) have identified four qualities that must be explicitly (Siegel & Bryson, 2018) nurtured in order for a child to be open, receptive and engaged with their learning environment in a way that builds their development and maturation.  These four qualities follow the acronym of BRIE, reflecting balance (of emotion and behavior), resilience, insight (a child’s internal compass), and empathy.  These qualities are remarkably in line with the moral virtues of temperance, fortitude, prudence, and justice.  Here the virtue of temperance teaches  important skills in self-regulation and managing one’s emotions and behavior.  Fortitude is the ability to demonstrate firmness in difficulties and constancy in the pursuit of good.  Prudence is the use of practical reasoning to discern the good in every circumstance and to choose the right means of achieving it.  Lastly, justice has to do with the proper relationships with and the  fulfillment of obligations to others.  The cardinal or moral virtues, according to St. Thomas Aquinas, are thought to be “pivotal” since our good functioning hinges on our ability to practice these four (CCC 1805).  Similarly, the BRIE interpersonal neurobiology correlates are associated with healthy childhood and adolescent adjustment.  Practicing the moral virtues by creating a school culture that focuses on and uses them to build character provides a central means of immersing children in the grace that is their purview by baptism and wires and rewires their brains for well-being across the developmental lifespan.  For example, teaching temperance in the elementary school years prepares students to better manage the social and emotional dysregulation that accompanies the middle school and early high school years which is referred to as the “second window of opportunity” as there is intense neurobiological construction going on at that time.

SEL and the Moral Virtues

One can readily see that the moral virtues correspond also to the CASEL recommendations for the five core competencies of social-emotional learning (e.g., balance/temperance = self management; resilience/fortitude = self-management + right decision making; insight/prudence = self-awareness + right decision making; empathy/justice = social awareness + relationship skills) suggesting a good consilience between these two avenues of instruction.   Interpersonal neurobiology posits, similarly, that the core skills of balance, resilience, insight, and empathy are needed for healthy brain development and these correspond directly to the cardinal/moral virtues.  According to research on neuroplasticity, healthy neurodevelopment necessarily occurs in the context of secure teacher-student relationships, a safe school culture and well regulated emotions and behavior.  The comprehensive and complementary instruction in SEL and virtue education addresses the needs of the whole child, promotes Christ-centered development, and optimizes attachment and learning in the classroom.  Gwen Byrd, Superintendent of Catholic Education in the Archdiocese of Mobile, Alabama, share the following testimonial of virtue education:

“Last year, some of the grandparents from one of our schools told me they could see a difference in their young grandchildren since the ‘virtue program ‘ began at St. Ignatius, one of our elementary Catholic schools.  The grandparents noticed that their grandchildren were more thoughtful and caring of others and that they actually talked to them about how they should treat others, not just their friends, in more kind and thoughtful ways. After noticing the change in their grandchildren, the grandparents asked them what they were learning at school and were told all about Education in Virtue.  The grandparents wanted to thank the schools for bringing virtues back into the forefront of our schools.”

Numerous such examples demonstrate that the language of virtue is foundational to SEL as it creates a school culture that helps students to build character, create positive and meaningful relationships, and organizes students emotionally and behaviorally in order that they can be more receptive and engaged in their learning.  Essentially, the lexicon of virtue in everyday educational life gives children the power to live and act under the prompting of the Holy Spirit (CCC 1812).  Certainly, the interpretation and implementation of SEL skills and curriculum in some settings has been problematic; however, in the theological and moral virtues, the gifts of the Holy Spirit, and the sacraments binds such teachings that they remain focused on the dignity of the human person as God intended.

We also suggest that virtue education allows teachers and educators to address discipline in a positive and non-punitive manner thereby promoting self-reflection and self-control.  Talking and thinking about the lexicon of virtue aids students in building a reflective buffer between impulse and action (i.e., often driven by emotion) that allows for greater self-control and good decision making.  Similar to Positive Behavior Support interventions, which provide a framework and a tiered system (e.g., school-wide, group, and individual interventions) for addressing the social, emotional, behavioral, and learning needs of all students, virtue education creates a safe and flexible school setting that improves academic and developmental outcomes.  A shared vision of virtue in the context of a Catholic identity, drawing on the grace of a Christ-centered daily life, allows administrators, teachers, and students to clearly understand school-wide expectations, to practice responding to challenging situations with a common language, and allows for specific feedback on all three levels of PBS intervention.  For example, Principal William Waech from St. Frances Cabrini School in Milwaukee shared their virtue program from a PBS perspective and reported the following:

“Embedding virtues into our school culture through common expectations has been a difference maker for Saint Frances Cabrini.  We took the amazing work the Sisters  did and embedded it into a school oriented program.  We use the virtues of Humility, SElf-Control, PerseverAnce, Responsibility and RespecT to spell out the word HEART, which comes from our school’s Patron Saint of Mother Cabrini as she was devoted to the sacred Heart of Jesus. Using those 5 virtues as a guide we were able to create a Matrix of common expectations for a variety of areas in our building including the classroom, hallways and recess!”

Other schools have also shared, from a Positive Behavior Support standpoint, how virtue has informed and infused all aspects of their school culture.  Sherri Simon, Executive Assistant to the President’s Office of St. John Paul II Schools in Fargo, ND:

“The Disciple of Christ, Education in Virtue program has been transformative for our students and our school’s Catholic culture as a whole. Students are able to identify for themselves which virtue they may not have been exercising when they have done something wrong. Students and staff are called out in special ways when they are exemplifying a particular virtue. The weekly virtues are shared in newsletters and on social media to assist families in furthering conversations about the virtues at home. The virtues are incorporated into our activities for coaches and high school athletes to practice the virtues beyond the classroom walls and on the playing fields. We are on year four of the program and our schools’ sponsoring Diocesan parishes with an elementary school attached are tying in the virtue language in weekly Sunday homilies as well. It has been wonderful watching this program starting to encompass every corner of our school and Catholic community.

We are putting forth that virtue education, Catholic identity, sacramental living, and modern neuroscience integrate in a providential way to create an educational experience where children can live in grace and grow into the disciples God uniquely intended them to be in His kingdom.   In an age when so many stakeholders are trying to vie for our children’s development and even their souls, the time for the grace of Catholic Christian living and virtue is now.

“So neither he who plants nor he who waters is anything, but only God who gives the growth.”  1 Corinthians 3:7

Watch our video below from the series Unlocking Education in Virtue to learn more. 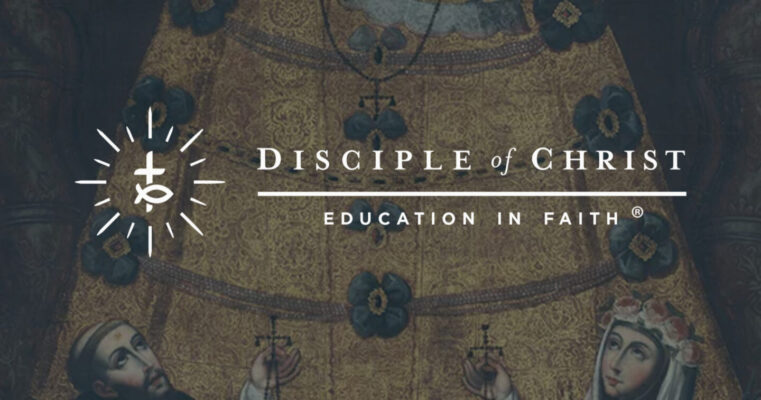